Turtle of the Day - 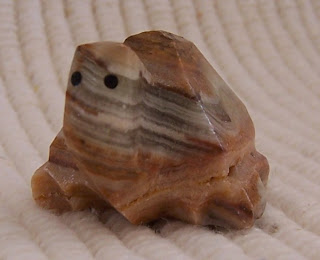 Just realized I had not posted any of my turtle collection pictures recently - I got so caught up in the new turtles, as well as the "quick, gotta get this done NOW" quilt project (which I am happy to report is done except for the label - and with a week to spare).

This little guy is a carved stone turtle from Akiyoshidai - the largest karst region in Japan, and location of Akiyoshiodo cave. I picked this little fella up as we exited the cave - the sidewalk leading out was lined with little gift shops with all sorts of stuff. This was part of the school bus tour that I mentioned when I introduced Topsy. We went to the cave area first, so this was the first turtle picked up along that trip.

I have no idea if he was made from the local rock, but I liked his "style" - with his little black eyes and the stripe just below the eyes that looks like a little mouth. His head/neck are connected back to the shell, so he is not an intricate carving, and he is probably only as big around as a film canister (remember those???)
Posted by Regina at 4:11 PM

This one gets my vote as the most unusual looking turtle around...still very cute though.

have a great weekend!

I guess it's what you would call 'naive' (simple) carving - I really like it.. the stone reminds me a bit of agate.. but I'm guessing the cave was limestone? :O) I love turtles too and have a few around the garden