...None of Your Monkey Business

...that is if you are my Brother and Sister in Law reading this, since this has not been delivered yet.

For all the rest of you - the QUILT IS DONE! The last of my unfinished Christmas projects was completed on December 26th around 3pm. Just need to arrange delivery now.

This was a truly "fly by the seat of my pants project" - I purchased charm packs and fat quarters and yardage in the Five Funky Monkey line by Moda, as well as wonderfully wide 54" fabric for the backing, but just did not quite have enough to pull it all together. Rather than going back for more - which was a bit beyond my budget - I opted to add in the yellow/orange fabric from my local JoAnn Fabrics. I think it was a good choice, and I was able to do double duty with it in the dragon quilt (which I forgot to take a photo of...oops)

My only major oops on this quilt was in the binding - I used an online calculator and plugged in my block sizes and number of blocks, and it told me I needed 2 yards for the binding. In my pre-holiday mental frazzle, I did not even question that, and sweated it a bit because the fabric I found that matched the best only had 1 3/4 left on the bolt.

"Measure Twice/Cut Once" - should be "calculate twice/cut once" - anyone need enough brown binding to go around a throw quilt - possibly even a twin??? Turns out - according to both the handy dandy quilt calculator I got from my hubby AND the shopping guide I got from Lazy Sister Sue - that I only needed about 1/2 yard. OOPS!

It never ceases to amaze me how powerfully the senses of taste and smell are connected to our memories. I think that must be why we turn to favorite recipes from childhood - especially around the holidays - those little mouthfuls of memories that take us back to the magic of the season as it was when we were young.

In our house my hubby was the baking fanatic this year - I managed to crank out a batch of my favorite butter crescents (or moon cookies -as the Munchkin called them), but other than a big gingerbread cookie (BIG pan - one BIG cookie) I just stood back and out of the way as hubby made Russian Tea Cakes, Cutouts, and super yummy decadent truffles.

So why the picture of the big pretzels? Well -it was not exactly a Christmas memory - but these big puffy soft hot pretzels brought back memories of my own childhood attempt at pretzels, straight out of Cricket Magazine - of which I was an avid reader. I still have them all - from Volume I Issue I on up for about 5 years. I am saving them to share with the Munchkin when he is old enough - and I hope that he finds as much enjoyment in them as I did.

Who needs 1.21 gigawatts of electricity for time travel -just stock up the fridge, fire up the oven, pull a book off the bookcase - and away we go!
Posted by Regina at 1:35 PM 4 comments:

Just a follow up to our snowpeople of last week.
This is the picture that was taken the next morning - after the rains came.

We still have the two base blobs in the back yard -like 2 big snow stools.
With 12 inches predicted for Sunday, perhaps our friends will come back soon??? (and stay a bit longer this time?)
Posted by Regina at 3:35 PM No comments:

I still cannot figure out how a bigger tree ended up with fewer ornaments on it this year?

Sunday we put up our new 7 1/2 foot tree - and after wrestling with some light issues - loaded it up with over 1000 tiny white bulbs (about 50 of which are now out, but that is an issue for NEXT year now!!!) Circumstances did not allow actual ornament decorating to begin until last night. Of course the munchkin went right for the breakables in the box, but we managed to divert him and get the child friendly stuff in his hands and -mostly- on the tree. There is this band across the middle where it shifts from fragile to indestructible - and seems to correspond to his reach, although I am sure he will prove us wrong sometime this season.

For many years we decorated an old old old artificial tree - I think it was the original one my family had, although my mother will beg to differ on that. Anyway - it was very open, all the way through, and I loved that I could hang ornaments all the way in and see the sparklies all the way through it. This one is much much much thicker, so we could not do that (although we have a strategy for next year that may give us that back - without employing wire cutters! we shall see)

I still have some more "decking" to do - mantle to be cleared and decorated. It really means finding a place for all the stuff on the mantle, mostly fragile or non toddler friendly items that I will have to find a SAFE place for. I ran out of momentum last night to do that - but need to get it done to have a place for the stockings.

Some cookies are done - more to be made this weekend. Sunday looks to be blustery and cold, so perhaps we can stock up on ingredients and just bake the day away!

Posted by Regina at 9:47 AM No comments:

It seems like just yesterday it was Thanksgiving, and I was well on schedule to getting all my Christmas projects done and in the mail and to far flung destinations ON TIME! And now it is December 12th and I am not as far along as I thought I would be. One project is holding up one package - and it is not really a big project but something I have never made before, so I just need to dive in and do it.

The rest of the packages are local, and not needing delivery until December 21st at the earliest - so I have a bit more time there... I think!

Of course there is still a tree to decorate, and wrapping to do, and cookies to bake, and, and, and...

But amidst all this is a beautiful almost-3-year-old who is really aware of the magic of Christmas for the very first time.

So as the munchkin will sing... "Good Dining To You, and all of your Kin" - and be warned that your gifts may be a bit late!
Posted by Regina at 1:14 PM 1 comment:

is the effect by which one accidentally discovers something fortunate, especially while looking for something else entirely.

Last night I went out looking to teach a class, and came home after discovering some great new friends.

The class was on two Lazy Girl patterns - the Wonder Wallet, and the Checkbook Cover. I had been offering these in continuing education programs at two different schools since Fall of 2006, but unfortunately I could never get more than one person to sign up, which was lower than the minimum the schools required, and so the classes never ran.

It turns out that the one person signing up each time was the same person - "G" - who REALLY wanted to make a checkbook cover for her mother for Christmas. She finally asked if I would be willing to come to her house for a private lesson if this last class at the school was canceled, and I said "sure!"

It turns out that "G" hosts a weekly girls crafting night with some of her friends, and two of them also joined us. "G" made both patterns, and one other friend just made the wallet, and one woman was just there to relax and socialize.

I tell ya - sometimes you walk into a home and meet new people and feel like you have known them forever - this was one of those times! I got a chuckle out of "G's" son, who came in and said "Mom - where's the teacher?" and when he was told it was me he said "Oh, I just thought she was one of the regular ladies!"

I like that - "regular ladies" - and when "G" asked if I would consider coming back and joining their group - I did not hesitate to say "YES!!!"

From teacher to friend - all in less than 3 hours - what a great way to spend an evening!!!
Posted by Regina at 1:38 PM No comments: 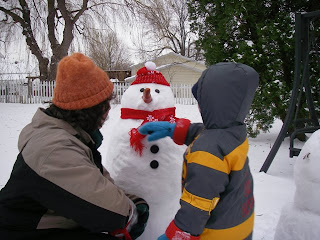 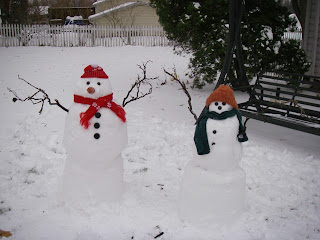 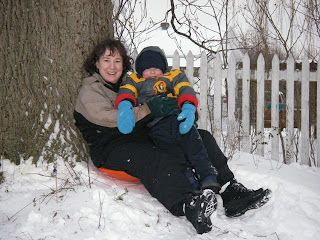 Today was one of those days when all the elements came together for a perfect afternoon.

Add in a little bit of sledding down the "hill" (the raised earth around the roots of the big black walnut tree - maybe 2 feet, tops...) and some driveway shoveling, and it was a great time.

Until it had to end...
...first by us having to go in and get warm and dry
...and then by the rains coming - I wonder how our snowpeople will look by morning? We forgot to give them umbrellas. Who knew???
Posted by Regina at 9:58 PM 2 comments: