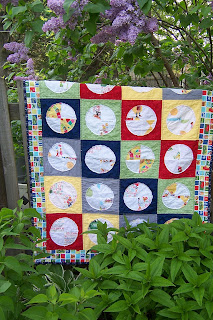 A new baby boy is about to make his entrance into this world... though he is half a world away from me.  A new baby boy with a big sister - who was the recipient of this fun Dick and Jane quilt.

I thought the pieced circles were fun - and liked that it would make the two quilts "connected" - so the kids can figure out which wedges came out of which blocks on the other quilt.  I still had some of the background fabrics left from Nanami's quilt -the red, green and yellow - and I added in some nice grey and royal blue to round out my squares.

The circles are just raw edged applique.  I stitched them on to the base blocks, then during the quilting, I stitched around them again with the brighter quilting thread.  The quilt has been washed twice, and the edges are already starting to softly fuzz up nicely.

For the backing I could have used the same yellow as I did on Nanami's, but I wanted to show off a few of the fabrics uncut - so you could get the full impact of the Dick and Jane text and illustrations.  I used some wide cuts, some strips of the green and yellows, and a few "color bars" to get things to the width I needed.  It is a bit busy, but lots of fun.

The quilting is just a grid of the blocks, and then each circle.  It worked up fairly quickly, and doesn't overpower the busy fabric on the backing.

For the border, I was able to eek out enough of the "building blocks" print to frame up the quilt.  If the quilt had been any bigger, I would have been in trouble as I barely squeaked it out on this one.  I like how the colors play around the quilt to frame it.  This fabric is also NOT in Nanami's quilt, so unique to this one.

For the border - I wanted something blue but had run out of the blue I used in the blocks.  I have a bolt of this blue/white print that reminds me of Japanese indigo fabrics, and I thought that would be fun to use.

This little quilt is on its way -and should arrive before he does. 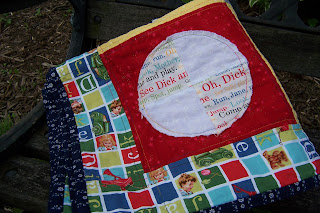