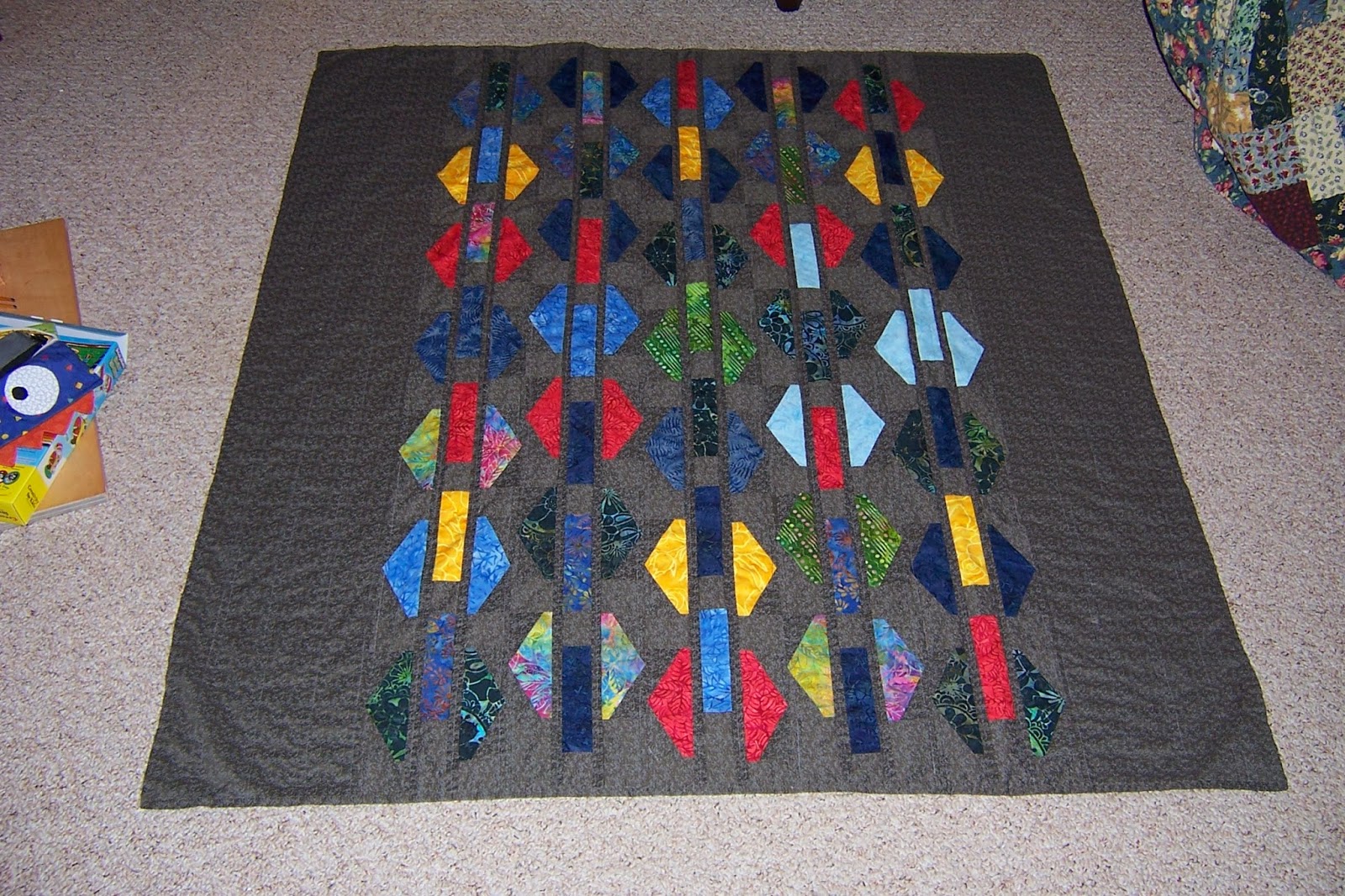 I am not sure whether to call this a 2013 quilt, or a 2014 quilt.  I pieced this over Christmas break but finished it today - it was not a planned project, but a friend is undergoing some medical stuff and I wanted to do a quilt for him.  I had seen this pattern online and wanted to try it for myself.  Only it featured the Moda hexagon precuts - which I didn't have.  And a lot of white - which I didn't think was the right choice for this particular project.

I wanted to use the grey for my background, and I wanted to cut my own hexagons.  Since I have the Hex-N-More ruler from Jaybird Quilts, I figured I could cut away at a bundle of batik and do my own thing.  Except I didn't figure on how hexagons are measured - I did 6.5" strips figuring I would get 6" hexagons, which is what I thought the Moda precuts were.  Except they are 6" through the middle, not height, so my hexagons ended up both taller and wider than the Moda ones.

No trouble - I adjusted my sashing accordingly (um - after I had already cut it too narrow and had to go back and recut), and dropped one hexagon out of each row - adding them in on my backing.  The finished dimensions are about the same - though I used less fabric in my side strips as a result. 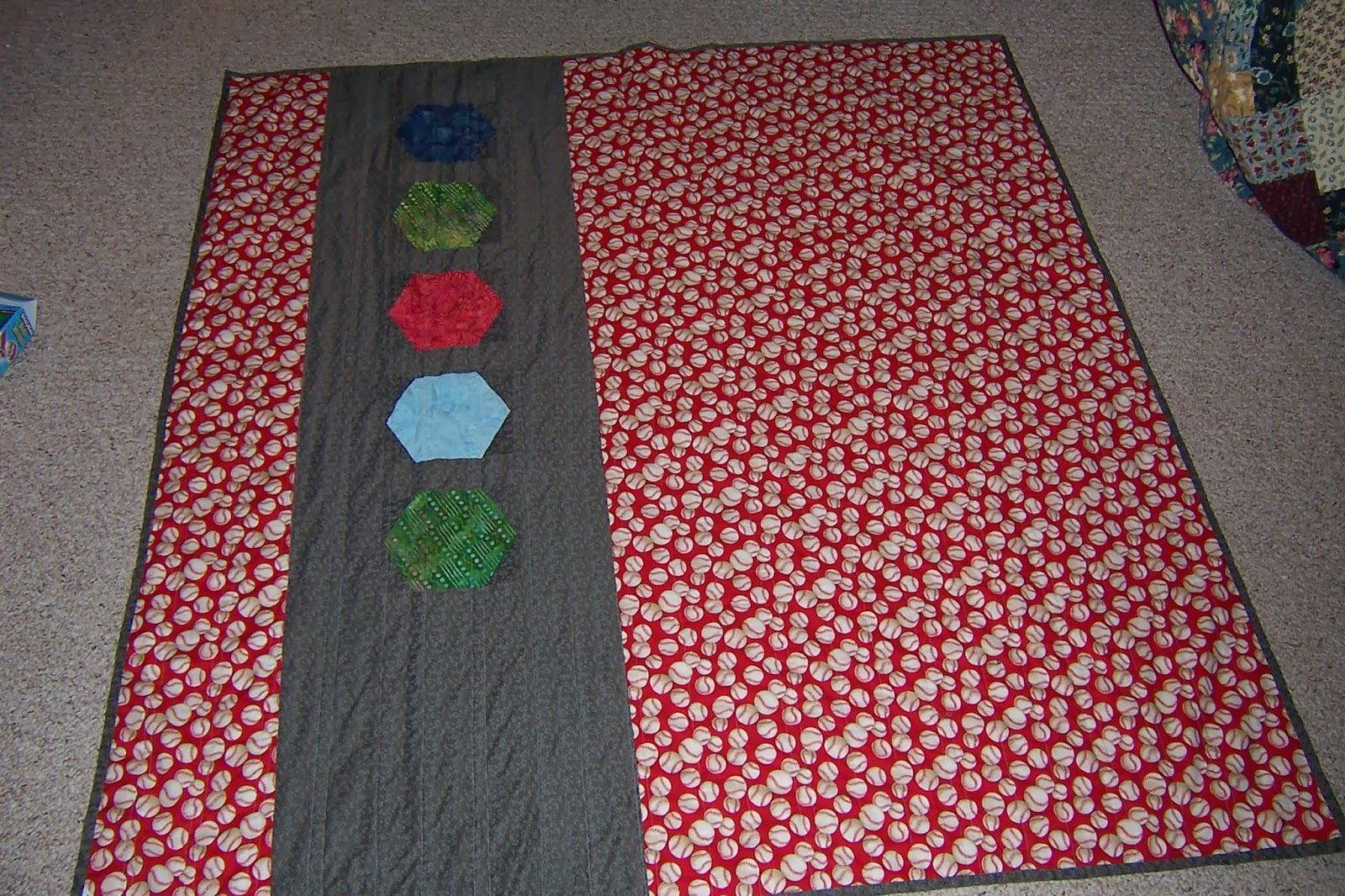 I am happy with how it turned out - and would probably make it or something like it again.  Start to finish for the piecing including the cutting was less than a day.

The quilting I finished up on this today - just straight lines with some variegated Aurifil on the front, and a solid grey thread on the back.  Binding was the same fabric as the background, and as we were home with a "snow day" due to the Polar Vortex I was able to quilt AND bind this today (and snuggle under it in the process).

The recipient is a big baseball fan - so that dictated both the backing fabric and the name of the quilt.

OK -I am in. I've said pretty much all these things -but not committed to them in writing.

No books or patterns.
No backings.
Just thread, backgrounds (neutrals), and batting (for me that means flannel).

I was very good deleting all the "big year end clearance sale" emails that came after Christmas.

Good thing I like scrappy quilting and have plenty to work with!

Christmas 2013
I don't count this one as a full quilt - it was a 2 yard piece of polarfleece, with edges hemmed - and the Android logo appliqued in the corner. This is for another nephew - and I didn't put a tag on it (yes - bad quilter, again!) 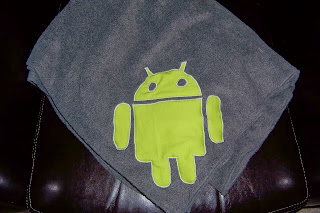 Posted by Regina at 1:00 AM No comments:

This project was a long time in the making. I started it in May while teaching a class at Chestnut Bay Quilting on the Lotus pattern by Jaybird Quilts.  It was a gift for my sister-in-law.  This is another one of those "deceptively easy" patterns that looks complicated but is not really.  I made 4 Lotus quilts this year - and would definitely make one again!!!

The toughest part on this one was the quilting - it is a very big quilt and I decided on straight line quilting - not hard but time consuming wrestling it under my little machine.

I love how this one turned out - parting with it was tough but we visit them often so I will get to snuggle under it again sometime... I hope (unless she keeps it hidden!).  I love how it is soft and feminine - but not so frilly that it won't fit well in a household with my brother and 2 nephews.  (and I also love that I have more of this fabric!!!)