Playing in my sewing room today - having fun prepping fabrics to make this: 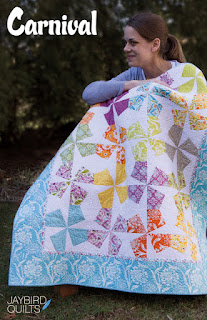 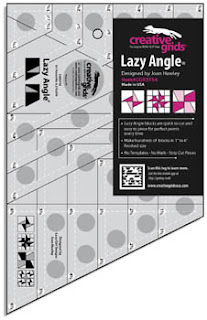 Fun fabrics - some stash, some purchased specifically.  I've been asked to prep a sample and teach a class on this in April - details to follow!!!

I remember not so long ago when a little boy would hold out his arms when I would say "sooo big." And now he can do this in our archway: 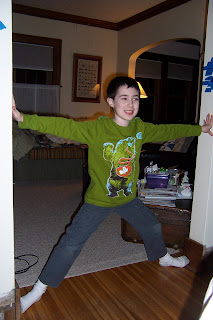 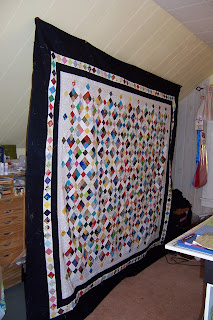 But his arms are still not long enough to hold up this quilt for me - nor are hubby's.  And with the clothesline down for the winter, I don't have a really good place to hang things up for photos - so I had to tack this up to the ceiling.  I reached up as high as I could reach - and it is still grazing the floor.

The final dimensions on this one are 85x96.

I was having a hard time getting a straight on shot - my cutting table was in the way - and I was pressed back up against the eaves on the opposite wall.  I really could have used a panorama setting on my camera for this one!

I've still got a lot of work ahead of me to finish this one up - though I am really appreciating having my set-in sewing table setup - just the top alone on this one is heavy with all the seams in it.  I don't know if I really could have gotten it to this point as easily with the setup I had in 2010 when this project was started.  It would be done -but I think the air in the attic would be a lot bluer!! 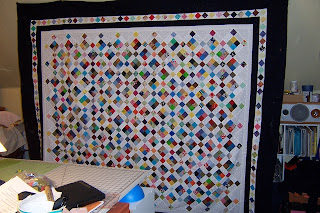 Each one of those colored squares is 2" and I'd have to check the pattern to give you the final count of just how many there are.

In a future post, we will take a stroll down memory lane and I will show you some of the fabrics that found their way into this one.

More blasts from the past 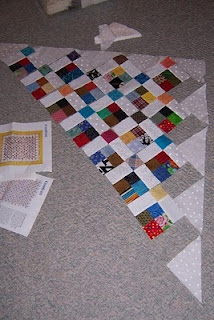 Bet you think I had forgotten all about it?!?!?

Nope - I hadn't.  I HAD stuck it back in its box after this brief attempt to bring some order to the assembly process - TWO AND A HALF YEARS AGO!!!

Now that I have a design wall - it's a bit easier to deal with - so assembly of this has recommenced in earnest.  4 of 19 rows were assembled tonight - and lots of setting triangles were applied.  The toughest part was getting my mind back in the "code" of my notations and figuring out what was done and what needed doing.  I think I am good now though - and if I run out of blocks, there are plenty more scraps where these came from.

Happy Happy New year to Teresa and Barb - my two winners for the Lazy Girl Yo Yo Cutie Pins patterns!

I hope to have more giveaways this year - that's one resolution that will be fun to keep!