Last month my Munchkin turned 7 -and I had mentioned that his birthday party was LEGO themed.
You got to see the LEGO cake that Hubby made for the family party - but I had not posted about what we had done for the Munchkin and his friends the following weekend.

We invited over 3 of Munchkin's friends - we had a few more on the list that were unable to come but we figured 4 total was a good number.

So the plan was a few games, some make your own pizzas, cupcakes and presents and done...

I prepared the "guess how many" game... (using a container from the LEGO store with a LEGO lid) 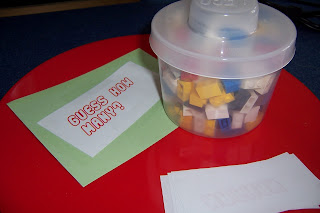 ...the goody bags (green is currently the Munchkin's favorite color - and we got the stickers and birthday minifigs from a LEGO birthday party kit - the others are mystery minifigs so you don't know what they are until you open them) 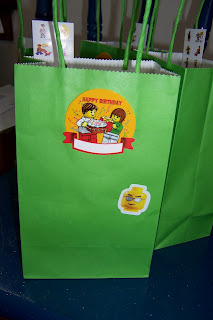 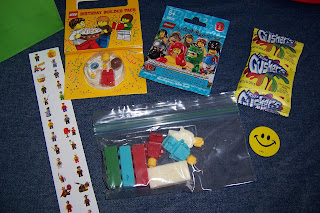 ...and a building challenge where I gave each 2 person team a box of identical pieces and they had to use everything in the box.  The first team to do so, AND be able to have the train run on their track, would win. 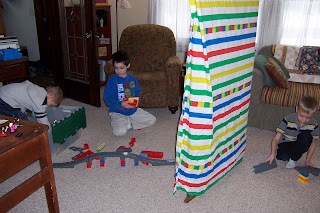 ...I even made medals, using beads I had gotten from someone at work, some extra stickers from one of the Munchkin's LEGO sticker books, metal rings and some embroidery floss. 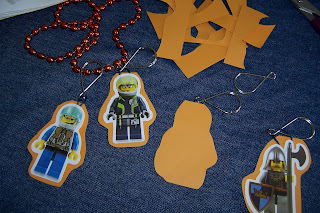 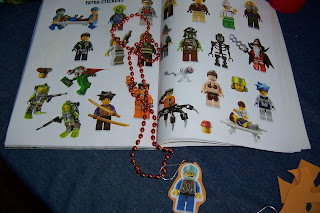 ...and we can't forget Hubby's cupcakes, topped with more chocolate minifigs and bricks and displayed on a LEGO baseplate. 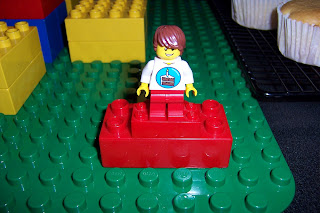 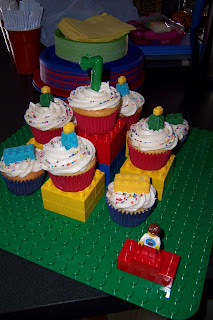 We did the building challenge, and we even made and consumed the pizzas... 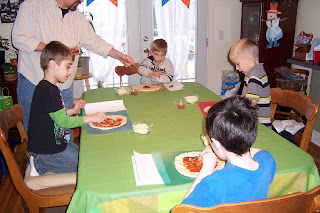 ...but the rest of the activities, including the "guess how many bricks tall I am"... went unplayed, and the medals went unused.  Even the cupcakes went home in containers instead of tummies...

And all because the Munchkin left his new LEGO Batcave set downstairs.   One look at that and it was all the boys wanted to play with.... so once I got them to clean up the building challenge bricks, I just put it in the middle of the floor and let them play.... breaking only for some pizza assembly and consumption.  (oh - and opening presents - but they did that VERY fast!)

And after everyone went home, we built a tower right up to the ceiling with all the bricks. 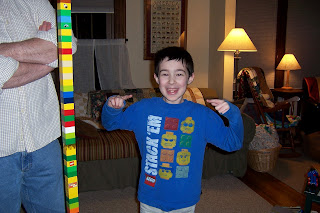 'cause sometimes you just have to go with the flow. 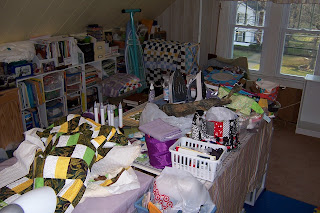 Before the Friday Night cleanup - but please note the NEW windows!!!!!! They open with one hand, and don't need prop sticks, plastic sheeting, or tetanus shots!!!

Completed 4Patches4Hope top is in the corner to the left of the windows, with additional strips assembled and underneath it on a drying rack.

And I LOVELOVELOVE the cubby units along the left wall - this was going to be shelving with a piece on top and curtain hiding the shelves, but I am so glad I went this route instead - so much easier to see my supplies and keep everything somewhat organized.

Completed green/yellow/white graduation quilt is in the foreground - I did get the binding on that last night. 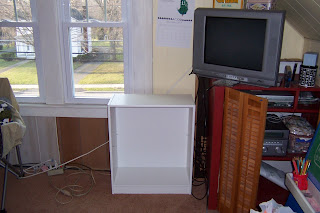 This little bookcase is where the bat was hiding - he was underneath it and got in from the back, so of course Hubby had to take everything off to get at it.  he also pulled most everything out of the cabinet under the TV - to be sure he was not behind there.  (you can also see the one small section of paneling that never got painted.  The yellow paint is all gone, but I think when I get a chance that I will put a couple coats of primer on this section just to lighten it up. 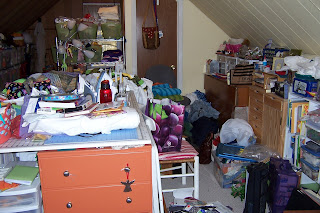 And lastly a peek behind the work table - where everything got dumped during the bat battle.

I need to go back up and get more photos - but trust me when I say that it is clean(er) and much more organized!!!

OK - so it does not work quite as nicely as "Friday Night Sew In" but after the battle of the bat, I had a lot of straightening to do.  As hubby put it - remember what the ballroom looked like after the Ghostbusters got done with it???  Yeah - it was nearly that bad.

But with some fresh air coming in the open windows (yeah - open - in NY - in March!!!!!!) I set to work setting things to rights... filling TWO garbage cans and a bag for donating on craigslist.  I found (and purged) some papers from 2008, unearthed some UFO's that had been OOM (Out OF Mind) - and nearly uncovered the entire cutting table.

And THEN - I even had some time to sew!!!  Of course it probably helped that the entire time I was looking at a clock that had never been "sprung forward" so I ended up working well past my normal bedtime.  I managed to make and apply a binding to the graduation quilt -and I hope to get it outside for some photos today.

and I know it is National Quilting Day - but the outdoors is calling LOUDLY - so after we return from the Munchkin's swimming lesson, I will be out doing some yard clean-up and taking advantage on this jump-start on the season.

It looks like my Friday night plans may NOT include sewing now.... we spent Thursday night tearing my studio (attic) apart to evict the bat that was flitting around up there when I went up to work on some projects.

The room is A MESS!!!!!!!!!!!!!!  So tomorrow night I will spend putting it back together - tonight was a wash as the bat did not get evicted until close to 10PM - and I was too wound up to focus on sewing straight lines - handling the iron was out of the question.

Oh the joys of home ownership...

I'll be doing my darndest to keep this week's momentum going. The 70 degree weather outside is a powerful distractor though - in western NY - SEVENTY, people!!!! But the sun is still going down early - so I can sew.. the "N" does stand for "night" so I think I'm good. Join us!

Posted by Regina at 8:37 PM No comments: