OK - so how could I pick 3 out of 4 and have one person not get to play. All four - Gina, Shellie, Heather and Zarina - should watch their mailboxes for a little special something from me (Shellie - you just might get yours hand delivered)...

A few weeks ago I received my Pay It Forward gifty from Jill - and with everything going on forgot to get a photo of it posted. 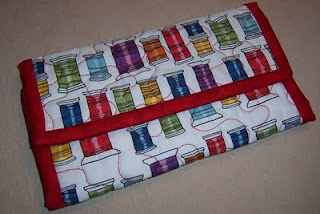 So now it is my turn to play.

To give more people a chance, I will take comments on this post until Sunday, October 18 at 8:00 AM - then I will pull 3 names and send those three each a little gifty from me.

Your only obligation is to then "Pay It Forward" on your own blogs and do the same for three more people - a great way to continue to spread the love!!! 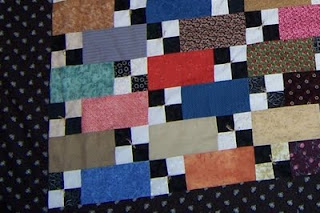 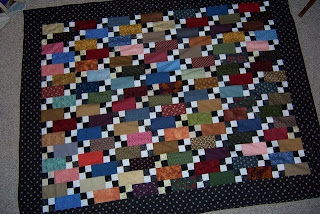 Earlier this spring I swapped some scraps with my Lazy Sister Sue, and we planned to do the Bricks and Stepping Stones quilt by Bonnie Hunter at Quiltville. I drove my scraps all the way out to Ohio for the April retreat, and all the way home, not working on the project at all.

This summer I got busy - and yesterday afternoon I tied the final knot and removed the last safety pin, and called it done. Of course it was instantly comandeered by the Munchkin, who turned himself into a quilted ghost, and then used it for a cave and tunnel for his trains as he played on the floor. I got it back after his bedtime, and field tested it on both the sofa and the bed. This one's a keeper!

Note the bees in the border~ and all those ties - in the middle of EVERY four patch. If I had it to do again I would have added an inner border, but I was tight on the bee fabric and it was one I could not get more of so I was not messing around too much by making the center too big. As it is this ended up as a nice large quilt - touches the floor on all sides of the quilted ghosty, and covers my side of the king size bed - and then some. 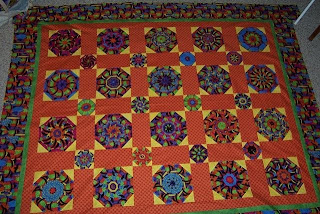 Concurrently with finishing up this quilt, I have gotten back to work on my Halloween quilt - dubbed "As You Witch" by Jill. I started back in July. Shellie has been after me to finish this one up - and now that things have settled down a bit I figured I could focus on it a bit better, since this is a "make it up as I go along" pattern and I could not remember exactly where I left off last - except that I had purchased fabric during my shop hop in late July to finish it up.

I had a slight change in plans as to how I was going to use the fabrics, and I ended up using the original novelty print in the borders, so you can see it both uncut and turned into kaleidoscope blocks. The dark black/brown with the orange dots will probably be the binding - the more I put it with the blocks, the more the "black" really read as brown and just did not work with the other fabrics, but I think it might work for the binding. 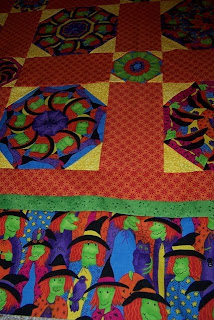 These pictures don't really do justice to how bright these colors are - the orange sashing is a red on orange print, the yellow is pretty vivid, and the lime, purple, blue and other colors in the blocks are also very intense.

I have a traditional Halloween white sheet for the backing - a vintage sheet still in the original packaging that I picked up at an estate sale. It's in the wash to get some of the sizing out of it but then I think it will be great on the back. I plan to quilt around and through the kaleidoscopes stitch-in-the-ditch which should create some "spider web" type areas on the back - and i have some black yo-yo spiders prepped to applique back there to make this double sided.

19 more days until Halloween! I hope to get this done sooner than that so we can at least have some time to enjoy it before the Halloween decorations get put away!

Oh - nearly forgot that I needed to post a finished picture of "On Pinwheels and Kneedles" - the machine quilting turned out great and I was very very happy with this one. So was my MIL. 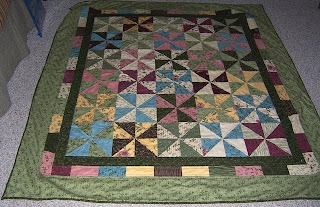