Where's my sonic screwdriver when I need it?

I'm making progress - the doors are done - the sides are framed in, and the TARDIS base is on.  I decided to do one more drop shadow around the entire door to frame it in - so had a run of very very long and very very narrow pieces to put on.  The good news is that I am getting better on my mitered corners and didn't have to unsew any of them.

The next step is the top of the TARDIS, which will involve either paint, stencil or applique to do some lettering - not sure which route I am going to take just yet.

I did swap out one fabric in my master plan.  I had kind of a peachy marble fabric for the backgrounds - but it just wasn't doing it for me.   I like the fabric and will find a use for it eventually - but it just was not right for this project.  That's one of the pitfalls of buying fabrics online - sometimes no matter how good the images it is hard to tell how it is going to play in person.

Luckily in my stash I had this kind of beige mottled fabric with white stars all over it.  It seemed to fit the overall theme of this quilt without detracting from the TARDIS, and with 2 yards to work with, I think I will have plenty to finish up the sides.

Current measurements - without the top portion of the TARDIS, are 40 x 59.5

I am working on this quilt as a commission for someone.  There are lots of versions of a TARDIS quilt out there but  no clear tutorials out that I have found that I like, so I am determining my methods and dimensions as I go along.   (a tutorial WILL follow once I am done)

I need to make some measurements before I move on to my next step -this is some of my progress.  I am a bit further along - but the camera is upstairs and I am curled up on the couch. 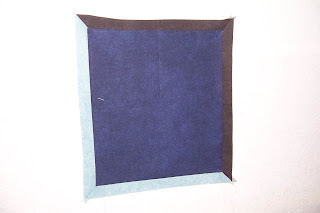 It is Dimensionally Transcendental  - and the first steps of a work in progress.

Posted by Regina at 8:43 PM No comments:

I have been knitting away with this yarn since BEFORE Thanksgiving of LAST YEAR!

Nearly 12 months later, this little ball is all that remains of the two skeins I started with. 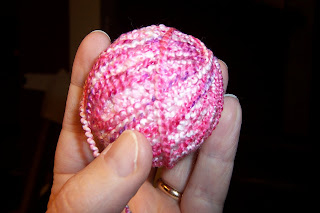 It is taking me FOREVER to make this ball any smaller - but I hope to be casting off soon and be able to show you my masterpiece!  My goal is to finish this BEFORE sitting down to dinner on Thursday (another reason it is a good thing we are going TO family and don't have to clean or cook at home - more time for me to work on this and other projects)

This is why I don't knit much.... it takes MUCH TOO LONG to see results!!!

Posted by Regina at 2:00 AM No comments: 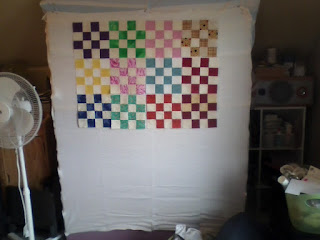 The significant thing here is not WHAT is on my design wall (4Patches4Hope blocks), but the fact that I now HAVE a design wall.

A bit of a challenge, since I am in an attic with slanted walls and not much flat wall space, but a few foam insulation boards from the home improvement store cut to length by hubby, a top sleeve fashioned out of a few of the Munchin's receiving blankets, a long piece of elastic with suspender clips to "belt" the two foam boards together in the middle, and a piece of batting pinned up for my wall surface, and I am good to go!!

And the best part is I can easily collapse it down if need be. 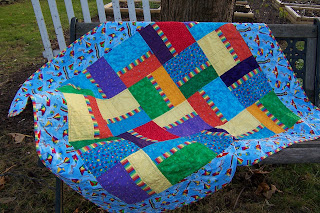 My brother recently became an uncle again when my sister-in-law's sister had a baby boy.  As "almost Aunts" to baby Luke, you know that Lazy Sister Sue and I could NOT sit idly by and not have a quilt for this new little guy.

Sue pieced the top in SC at a recent retreat she attended, then shipped it up to me for backing and finishing.  We consulted each other a bit on the choice of pattern, but she had some fabrics for the top at her end and ran with them.

I had something in my stash I was hoping to use for the backing - but didn't know until the top arrived in the mail that it would work WONDERFULLY to compliment her fabrics.  I just had to insert a strip to allow me to use the width of the fabric for the backing - adds a great punch of color and interest to the back and uses so much less of the focus fabric than piecing a backing out of a single fabric.   I use this style a lot for my lap and throw sized quilts.

I was able to use a bit of variegated rainbow thread for the 'not so' straight-line quilting - I had a spool left over from a project I had done last fall.

I used a bit of fusible and fussy cutting for the label - using the scraps cut from the excess backing along the sides of the quilt.

Sue had enough of the rainbow stripe left over for me to use it for the binding as well.

This one will be packaged up and sent along soon - along with some other goodies. 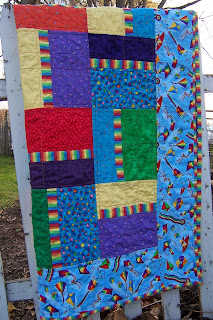 We just love quilting for family!

Just not feeling it...

So the Munchkin and hubby are playing Wii -a normal Friday night occupation around here since we don't turn it on on school nights- and I headed upstairs to get busy in the studio - clearing the table for a new project (still waiting on some materials and can't start cutting until they arrive) and resisting the temptation to make something else "accidentally."

Some nights I do well when I get into the "sort and clean" mode - I've even been known to spend a few hours with the rotary cutter - sub-cutting scraps into my preferred sizes.

Tonight was not one of those nights.  I have a few UFO's - but the two I really want to work on require some fussy pinning or a design board/floor.  Not up for that tonight.

Yeah -I am whining -sorry.
I think I will go in and watch their game and see if I can get into my knitting.
And maybe after the Munchkin goes to bed I will try again...
And maybe not.

Ever have one of those evenings?

The Munchkin's school was closed on October 30 as we anticipated damage and power outages from Sandy. Fortunately for us, the impact was minimal and no where near the devastation in other parts of NY, but school remined closed nonetheless. So we enjoyed some "home school" on our "Sandy-Day"

Wii Sports Resort filled in for PE and we did some bowling, some table tennis, and even some sky diving.

Perler Beads were our art class.

Our shadow box from last winter was "free-composition" class.

and making a mug rug for the Munchkin's teacher was math class... doubled.


It was a learning filled day - which started with a science lesson on optics. 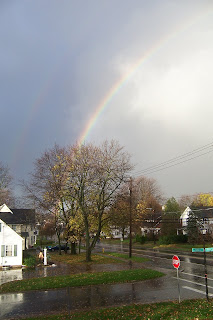 If you look really really closely - you will notice that this is a DOUBLE rainbow!!!

I love how this quilt turned out - though it took me long enough.  The kit was a jelly roll - the directions said cut all the pieces separately.  I should have followed my strip piecing instincts and not followed the pattern.  In the end I put it together my way - but ended up doing much more sewing than should have been necessary.

And then I sent it to Jill at Darling Jill Quilts to work her magic. 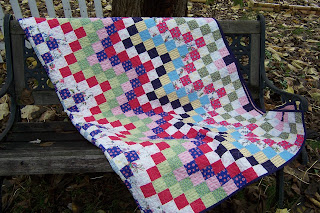 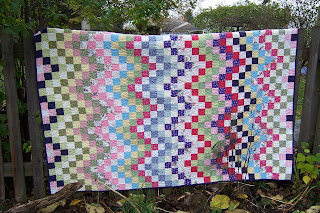 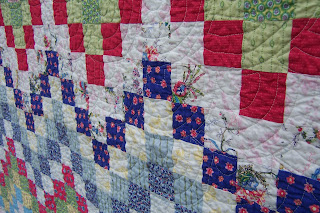 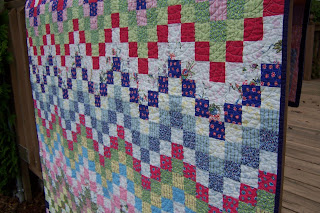 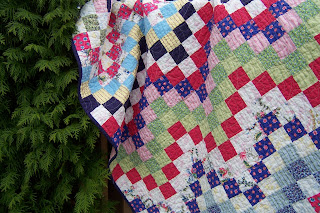 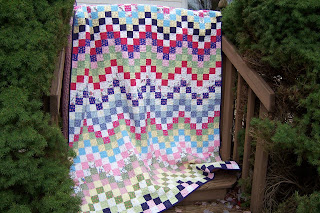 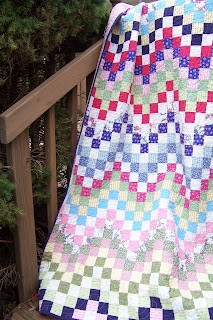