Turtle of the Day - "Topsy" 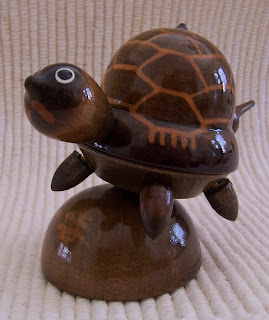 "Topsy" was a fun find. I was on a trip in Japan and found this in one of the gift shops in Kyushu. I was a teacher in a girls public high school in Kanazawa from 1990 - 1993. In the fall of 1990, the 11th graders went on a school trip, traveling south from Kanazawa, stopping in Nagasaki, Beppu, Kobe and a few other places in between. I was one of the teachers who joined the class on this trip.

I was fortunate - because I already had strong Japanese language skills one of the teachers had gone to bat with the Vice Principal and convinced him that I could serve as a chaperone on this trip. Other American teachers had wanted to go in the past, but due to their lack of language skills the Vice Principal thought they would be more of a burden to the other teachers than an asset to the trip. This teacher - an older gentleman with limited English skills, taught Physics - and took a shine to me right from the first day I was introduced to the teachers. In fact his conversation with the Vice Principal took place within the first 2 weeks I was there. He helped me improve my language skills, got me involved in all sorts of activities in the school that normally I would have been left out of, and kind of became a surrogate "grandfather". My daily routine at school included a visit to his office for "tea and conversation" and I learned much from him. "Topsy" reminds me of him. 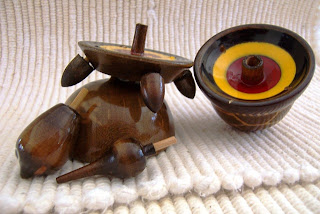 Each part of this turtle is a top - including all 4 legs, which I did not remove in the 2nd picture as they are really tiny.

Yes - I have had all parts of this spinning - the tail is the hardest as it is so long and narrow, but it can be done. I also like how the artist made a little base for this to perch on - and the base is a top, too. And the red and yellow design on the inside was an unexpected treat, since the outside color is not that bright.

This is one of my favorites in the collection.
Posted by Regina at 11:30 AM

My favorite one - so far.

How large is it - in height and width?

Sounds like it really brings back many pleasant memories.

Topsy stands probably about 5-6 inches tall fully assembled -and about the same length nose to tail.