OK - so this Turtle is not exactly part of MY collection - he is part of the collection at the Boston Museum of Science, where we spent the better part of Easter Sunday. 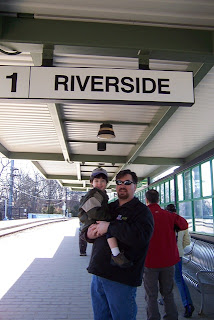 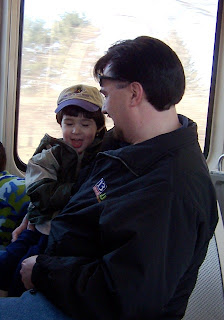 The Munchkin got his first major ride on a train - 5 trains to be exact - and experienced both "interurban" and "subway" modes of transportation! He was so very excited! Unfortunately the pictures did not turn out so great. Exhaustion got the better of him, though, and he fell asleep on the last train of the day as we headed home. We had a great time at the museum, and were especially surprised at how relaxed and enthused he was in the snake and lizard display, considering the trepidation he has shown about some of the snakes in a few of his books. At one point he was nearly nose to nose with a Burmese Python (well - with THICK glass in between) and the python was moving towards the glass. He was not startled in the least, and wanted to "help" the snake because he thought he was stuck! He liked the walking Chameleon (so did Mommy) and a small stuffed Gecko is now part of our collection of "buddies" - named (what else?) - "Gecko". He's so original!
Posted by Regina at 1:24 PM

I'm sure he was excited to go on the train.