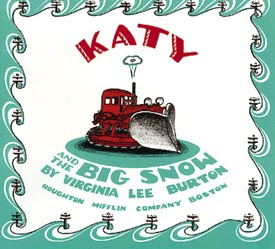 Yesterday the Munchkin turned three - unbelievably THREE! He woke up all smiles and "it's my birthday!" and then more giggles. He knew the 22 pocket was HIS birthday - and this morning got a birthday train set - 2 engines with confetti decoration, a "snow globe" tanker car with a cake and presents inside, and a flat car with a "present" on it. He opened those up over at Grammas in the morning, and I guess played with them ALL DAY.

We did dinner at the local diner - he ordered all by himself "grilled cheese and french fries please" and was tons of fun. Then back to Grammas for more "pwesents" - including a box from his SC Gramma with Katy and the Big Snow and some other fun stuff. Of course Katy was our bedtime story for the night.

His big present was his camera. His very own digital camera. Daddy and I had loaded it up with batteries the night before and it was all ready to go - except we put in rechargeable ones and they must not have been fully charged, because they gave out after a few pictures.

But the Munchkin loves his new camera SO MUCH he was willing to sacrifice the batteries in his Duplo diesel train engine to power the camera!!! Luckily that did not have to happen.

I am looking forward to seeing what kind of pictures he takes - so far we have a lot of the floor!

(Oh - day 21 was an oil tanker car for his train set. He was a bit grumpy that evening -having fallen asleep on his way home from Grammas - and even the car did not pull him fully out of the grumpies - but he's got it all lined up with all his other tanker cars now (he is up to 5))
Posted by Regina at 10:02 AM

Happy Birthday!
Isn't three fun? (My Small Man turned 3 on February 2.)
Please let me know how the camera works out - we thought seriously about getting him one, but haven't yet. Input from someone who's having it used by a real kid would be helpful.

Happy Birthday to your munchkin, Regina!

3 is so much fun, but *my* 3yo has finally discovered her inner 2yo, and those tantrums are doozies. ;)

My niece used to get so excited about her birthday and Christmas because she got "prizes!" It was years before she said presents!

Happy birthday to the Munchkin! My nephew turns three on March 9th and Emma (our dog) turns three on April 14th. Three is a big thing this year! Where did you get the camera? I think my nephew would like it!

Happy Birthday to the Munchkin! Sounds like he had a great time.