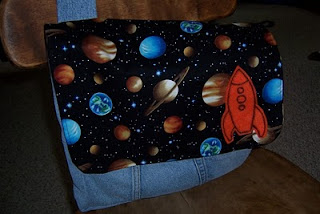 Well - the school bag for the Munchkin just did not work out as I had planned. Although it looked cool - and the concept of recycling Daddy's jeans into the Munchkin's messenger bag was really fun - the reality is that he rarely wore it as a messenger bag. It was normally being carried by an adult in and out of preschool -which does not work well with a messenger bag strap - the denim was too soft to have much "standupability" so the bag was floppy - and then for some reason the front flap started to fray out at the top seam.

So, while promising the Munchkin that he would still have the planet fabric with the rocket on it, I took a pair of scissors to the bag and began to refashion it.

I had a bit of the space fabric left, but little else. I took out the lining and cut that into useable rectangles, redid the flap into a patch pocket, made some straps, scrounged a lining fabric from my stash - and this is the new result: 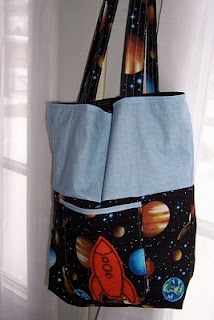 It still holds his folder and sneakers for school, is easier for him and the adults around him to carry, and is much less bulky to store on the off days.

I still want to do something with the denim - but for now the rocket flies on.

PS - my word verification is 'argue' - I sure hope I don't have to do any of that today! lol

The redo looks great! Hope you all like it better.

The transformation looks great, and I bet the Munchkin is thrilled. Good job!