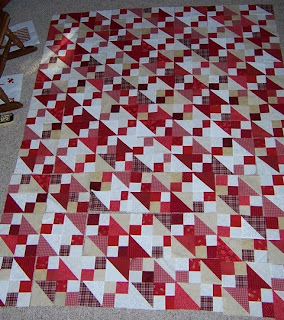 This year my sewing did not end with Christmas... and not because I had unfinished Christmas presents (I did - but not worrying about them right now)... but because I have a wedding quilt in progress for a wedding on the 29th.

8 years ago I was the coordinator for a foreign exchange student from Japan - language training, work experiences and living with a host family were all part of the program - but we had an additional little bonus because Hubby's parents ended up serving as Toshi's host family, so he became not only my student, but also my "little brother." It was a busy and fun filled 6 months - during which we purchased our first home and moved -Toshi even lent a hand during early renovation projects.

We have not seen Toshi since, but a few months ago he called Mom and said something along the lines of "guess what? I am engaged and we'd like to come to visit after Christmas and oh - while we are there we would like to have our wedding in your town." Their flight comes in tonight - and the wedding is Tuesday evening - they head to NYC for a bit of a honeymoon the next day and then back to Japan.

So of COURSE they had to have a wedding quilt!!

Thanks to the wonderful Red Rover pattern from Mary Quilts, I was able to raid my stash of reds and white/creams and put together a fun top that has fabrics from here and there in the family in it. The backing is one I picked up over the summer during a shopping trip with Shellie that reminds me of Japanese summer kimono fabrics.

Being sick the past 2 weeks really slowed me down - and led to a lot of spun patches and unsewing and resewing - but as of this afternoon it is all sandwiched and awaiting the machine quilting (diagonals).

The photo above is the initial block layout before the rows were assembled.

That is really beautiful -- what a special gift for a bride and groom!

Your story and the Wedding quilt are both beautiful. I think the bride will be speachless when she sees the quilt. I hope you get to share some pictures.

It looks great!! I'm so happy that it is coming together now and that it will done for the wedding! How awesome that they asked you and your family to participate in the wedding. It's fantastic!

The quilt looks great! Hope you have a blast at the wedding.

It looks great. It'll be fabulous when it's all sewn together.

I LOVE that pattern! I spend too much time at Mary Quilts drooling over her patterns. I had thought of doing this one in blues/browns, but now I am rethinking doing it in all reds. Merry Christmas to you!!