Retreat day 2... and into the wee hours 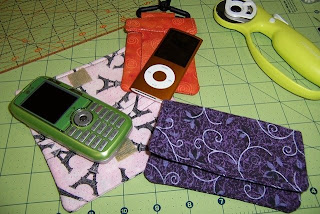 After finishing up the Step it Up top and getting some lunch - I started on another project I had kitted up.

It involved sewing a WHOLE lot of muslin squares to blue squares to make half square triangles, and as easy as that was, it was also VERY dull. My sleep deprived brain needed a bit more excitement to keep it awake, so I decided to make myself a quick pouch for my new ORANGE iPod Nano (thanks Hubby - I love it!). I used a few construction tricks I have learned from making Lazy Girl Designs Wonder Wallets, and added a few touches of my own.

When showing it off to the Peeps, a couple mentioned wondering if their cell phones would fit in a Wonder Wallet. We tried with the ones we got as favors at lunch -and it was a bit tight - so I quickly offered to whip up a couple custom sized ones for the Jen V. and Moneik. Luckily for me they have the same phones! (and lucky for Moneik I had a scrap of her favorite color fabric!) 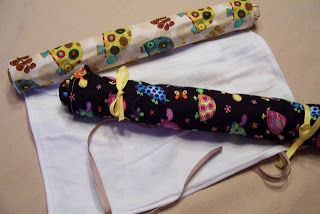 After that quick gratification project, I put together some block roll-ups under Jen's tutelage - Jen had provided me with one turtle fabric, and Jill with another - so I ended up making two. These are great - I hope to be doing more "quilting on the go" in the future and putting these to good use.

And then I moved on to my next project - I had 5 blocks leftover from Corkscrewball and had planned to turn them into a table runner that we can use for our big family Fourth of July picnic at our house. I set them with the leftover fabric from the backing of that quilt, and even have some of that binding left as well. I plan to use this to practice some free motion quilting, too.

This went together very quickly as most of the work was already done and I just had to rotary cut some strips for the borders and sashing.

After this little flurry of progress, I kind of fizzled. I could not settle on a project to work on - and kind of wandered around talking to others and looking at what they were working on. 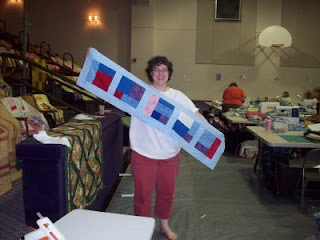 After dinner we played a game of Left-Right-Center - and Becka cleaned up 2 of the 3 rounds. She was very generous with her winnings, though, and I got some fun and useful FQ's out of it all. It was fun to take a break from the gym and go down to the lounge and just chill for a bit.

After the game - I kind of got a second wind energy wise, but was still not settling in on a project I wanted to work on. Becka and I stayed up until about 3:30ish - she was working on finishing up a pieced quilt back, and I was just kind of organizing my stuff - putting things away, and pulling out a few things that I planned to work on for Sunday.

Luckily I did not wake up any of the sleeping beauties in my room as I came in and creeped into my upper bunk.

It's more fun to read your blog post than it was to write mine!! It was so much fun!

What a great time! It was so fun sewing, and yet I felt the same way at times and couldn't concentrate on one project either. Thanks so much for the wonder wallet for my cell phone. It's awesome.