More from the Garden 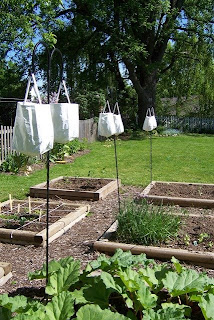 This time of year I am outside - a LOT - getting my garden planned and planted. We don't have the longest growing season here in western NY - in fact our last frost warning was as recent as last week - so it is always a scramble. I don't have a lot of space, or the right lights, to do a lot of starting of seeds inside - so local nurseries and big box stores are a frequent destination when putting everything together for the season, although a few things like lettuce, spinach, peas, beans and cucumbers did get started this year from seed in the ground (fingers crossed!)

Last year Hubby built me 6 planter boxes and over the winter he bought me a book about Square Foot Gardening. Now while I did not follow the entire Square Foot plan (namely -I did not empty out the nice soil mix I had gotten started in the boxes last year in favor of Mel's mix) I was able to plan out some planting sequences, box layouts, and conservation of space that allowed me to get a HUGE number of plants into the same amount of space I had last year. Two of my boxes have the "grid" that is touted in the book, while another three got eyeballed (and the last is completely given over to rhubarb.) 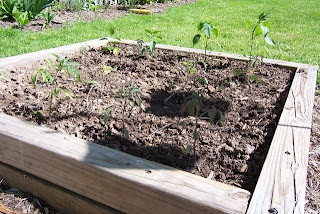 Most notable in my planting this year, however, is the heirloom tomatoes and peppers that my neighbor grew from seed - she had more than she could fit in her beds so I "adopted" whatever I could fit. I think I counted about 26 tomatoes -not counting the ones in the hanging bags - and 12 or so peppers, plus 4 zucchini.

I know - sounds like we are in a rut with those - but you add in the beans and peas, cucumbers, onions and hops, and we have quite a variety!!! 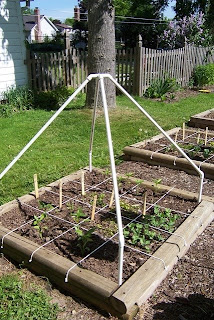 And note Hubby's "cukamid" - a pyramid out of PVC for me to let my cucumbers climb on. I had them climbing and trailing last year, and the climbing fruit was much larger and more robust, and had fewer rot issues, so I am trying to get it all to climb this year.

Looks great! You have been very busy and you gave me some great ideas. We are debating planting this year because everything we plant the deer and raccoons eat. We thought about putting it closer to the house, but they will still eat it. My hostas are close to the house and the deer love them! Happy Spring!

Regina, I so admire your ability to grow things... me, I can grow some killer dust bunnies!

Ozark Mountain Blog (Lara) is doing the same thing with their garden and looking for some inexpensive reusable stuff craft ideas. if you haven't read her blog, it might be of interest.