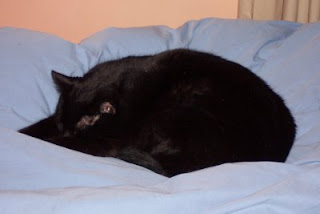 Nearly 16 years ago I made an impulse decision I was never to regret - I adopted two kittens and named them Joel and Maggie (ok - I was watching a lot of Northern Exposure back then). From the time I saw the ad in the paper and made my decision, drove about 15 miles to the store for supplies, and then to the address I had been given, and then home took less than 2 hours. I remembered the necessities like food and dishes and a litter box, but forgot to think about how I was going to get these guys home. They were kind enough to give me an empty Valvoline box, and I covered the top with my "how to raise a cat" magazine - driving home with one hand down country roads in the dark.

It must have been that box ride home that gave both cats an affinity for boxes - Maggie for sleeping IN them - Joel for sleeping ON them. And from that first trip, Joel was a great traveler - weathering 6 moves in his nearly 16 years - 2 of them over 800 miles - as well as a number of visits to family when I was traveling just too long to leave them home alone (Maggie -not so great - but she was a trooper every time).

In any of our moves to a new place, Joel was the first out of the cat carrier, first to explore every nook and cranny, and first to settle right in - Maggie usually took a few more days to come out from hiding. His sleek fur and habit of "slinking" soon earned him the nickname of "Panther Man" and "shhh - don't tell Joel he's really a cat and not a panther." 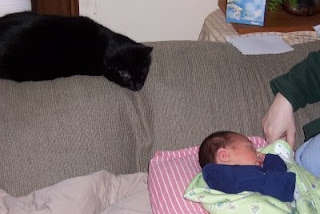 And when the Munchkin joined our family, JoJo was the first of the two to come anywhere near this noisy new member of the household, often watching over him from his perch on the back of the sofa, or sleeping near the crib. As the Munchkin grew, both cats became more wary, often scooting out of the room for self preservation.

But come bedtime, JoJo and Maggie were back, snuggling near feet, begging for a spot under the covers, purring contentedly.

Today we said goodbye to JoJo -and took him on his final journey. We were prepared with a proper box this time - hand made by Hubby - and laid him to rest under the forget-me-nots, in what the Munchkin is now calling "JoJo's Garden."

Farewell, "Panther Man." You will be greatly missed.

Goodbye dear JoJo. He was lucky to be loved and have such a warm family to love upon.

Farewell JoJo! What a great cat!

You know my heart, thoughts and prayers are with you and your family today. To give an animal love for their entire lives is a wonderful thing. To get that love returned is beyond that!

It's always very hard when one of our fur childrens little lives end. My love goes out to all of you at this time. Keep a special eye on Maggie she's going to need some special treatment for a while. He'll always be in your hearts and in "Jo Jo's Garden."

I can't believe i missed this yesterday... my heart breaks for you. It makes me miss Max more...
Love you sis!

It is so hard to say goodbye to a pet no matter how long they have been part of your family. My heart just aches for you and your family!

So sorry! It is a sad time. Hang in there. Farewell, JoJo. I know he will be missed dearly!