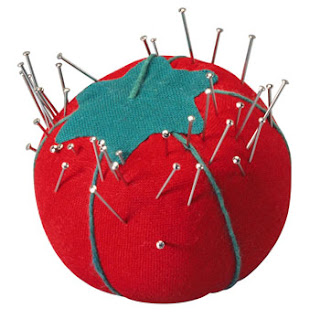 In preparation for a December 13th Craft Show- I have been sewing lunch bags - lots and lots of lunch bags. I did really well over the summer clearing out scrap bins, repurposing other fabrics (mens shirts and cut-off's from clothing alterations), and splurging on a few bargain bin fabrics -and had lots of them cut out and ready to go...

...but cut out and ready to go does not cut it - they needed to be assembled - and that I kept putting off...

Crunch time now - so I kicked in to high gear on Monday and production lined 20 of them - getting the inside pockets made and attached, the linings and outer coverings stitched and box bottomed and nested, and then I ran out of steam.

Last night it was COLD in our house - so rather than sit at the sewing machine (with my back to a French door - brrr brrr...) I opted to sit in the recliner with a quilt on my lap, a lap desk on top of that, and a box of pins so that I could get the linings and coverings all straight and pinned for the final assembly.

18 covers, 2 dropped pins and one episode of Dirty Jobs later - I officially was OUT of pins! Yup - used every single one in the box!

So now I HAVE to get these sewn up - or procrastinate some more and only work on projects that don't require pins...

Nah- I am in the home stretch -

Now if only I could figure out a way to machine sew from the recliner?!?

Oh, I agree...I would love to rig up a setup with my recliner...hmmm, I will have to think about that. Good luck with the lunch bags!

you have got to invent sewing from a recliner!!

I would love to do craft fairs...I think. Sounds fun anyway. I hope it goes well. Can't wait to hear. I've never run out of pins before. But I've also never made a bunch of things at once;)

You could do it if you had a start/stop button but that would still be uncomfortable cuase you'd be sitting on the edge of your seat. Why not set up a little table further away from the doors for this time of year?

Don't make me bust out my mad engineering skillz.

What Jen said although you could also wrap the doorway in plastic unless it is a door that you will have to use over the winter season...