Birth Month is over 1/3 complete 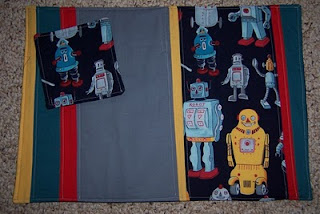 Being short - February just seems to zing right by - although I am sure those buried under feet of snow will disagree with me this year! Being in a normally snowy area that has not really gotten that much snow this season, it is strange to be reading of blizzards elsewhere and have nothing here but a low covering on the ground and mostly dry roads. NOTE - this is NOT a complaint -just an observation!!!!

We are over 1/3 through the month -and the Giveaway deadline is TOMORROW!!! Be sure to comment on the giveaway post for a chance at the "big" prizes!! LOL!

Gift giving continues on a daily basis here - hugs, iPod headphone extension cords, I Spy books, chocolate and Legos have been a few of the favorites for child and adult alike -

Tonight's gifty was a handmade one for the Munchkin - a robot placemat and coaster in preparation for his robot themed birthday party. The robot fabric was one I picked up over the weekend during my shop hop with Shellie.

It is just a fat quarter, so I wanted to stretch it as far as I could. 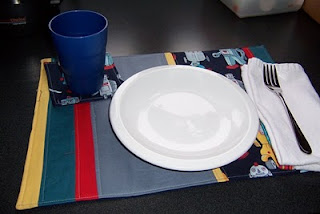 I have plans for some other little robot goodies, so I just took a small 6" wide strip to make the coaster and the focal strip on the placemat, stitching it down onto a batting foundation, and adding various solids which were in the "rainbow" of fabrics sent to me by Jill a few weeks ago (with the exception of the red - which has been in my stash for YEARS!!!!! Seriously - 3 states, 7 moves, and I still have scraps of it!)

The overall effect was cool - kind of retro like the robots - and very masculine. He LOVES it - which is the best effect of all! It's a tiny bit smaller than I would have liked, and a bit wonky -but it fits his plate, coaster and cup with no problem so I guess we are good. 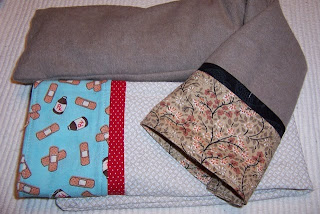 One other little gifty I made this month was not for Birth Month, but for my sister-in-law, who was a bit under the weather and in need of a heating pad. I love love love my rice bags for nice moist heat on sore spots, so I put one together for her -complete with two removable covers -one flannel and one straight cotton. Each has a little flange and cuff just like the big pillowcases I make - for a bit of fun and extra comfort.

Hopefully they won't get too much use - but now she has them when she needs them.

Have any books been gifted yet? Has the Munchkin enjoyed them?

Very cool placemat!! I'm glad that the colors are working out for you! :)

Love the rice packs. I will be making some of those for mom here in the next week or so. She is going to need them.