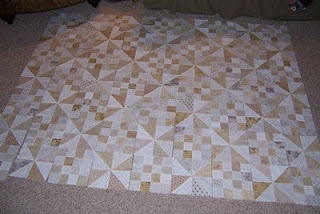 It looks fantastic!!! I love it!!! I must start working on my pieces this weekend!!

Love your creativity and the reveal!

Oooo...Regina. It is beautiful! I love that color combination. There is a pattern out there somewhere with similar colors and they call it White Chocolate. Very classy looking. I love it!

Love how the neutrals play against each other. Beautiful quilt!

Beautiful. I love the neutral colours!

That is gorgeous! I agree with Michelle, it reminds me of the White Chocolate pattern from Stitchin' Heaven.

I love the all neutral color scheme.