For a couple of years now I have been interested in doing a Stack-n-Whack type quilt. Lazy Sister Sue had shown me some she had done a few years back and I liked the effect, but once we moved so far away from my quilt teacher, I had kind of put it on the back burner and had not pursued finding a class locally.

When I went to the Peeps Retreat in April, we did a book and pattern swap among the peeps, each of us bringing things we no longer wanted and placing them on a big table up for grabs. 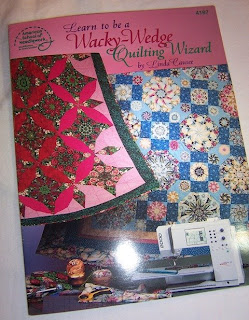 I was so excited to find this book in the mix - this looked to be another authors version of the technique - which basically consists of cutting your fabric in rectangles so that the pattern repeat fills each rectangle, stacking up 8 layers so that the pattern aligns through all 8 layers, and then cutting out wedges that are then assembled into octagons.

This book was the gentle nudge I needed to get my mind back on doing this technique - it became one of those nagging things in the back of my mind, even as I worked on many many other projects.

One hitch to my plan was that I am working on tight pursestrings where fabric purchasing is concerned -and the quantity needed for me to "experiment" with a new technique was a bit daunting. A few chunks I had in my stash that I thought would be good for this were too small. 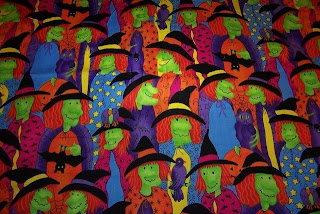 So not long after Shellie left, I got to measuring and cutting and stacking and aligning and cutting some more - and soon had piles and piles of triangles just waiting to be assembled. Most would end up in 8" blocks -the rest in 4" (and I even scraped a few 3" blocks out of the scraps).

And then the magic began - especially in the centers of the blocks... 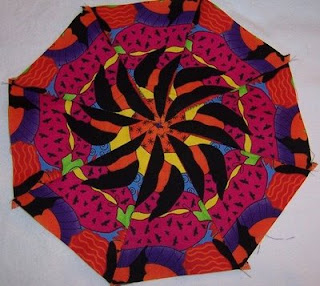 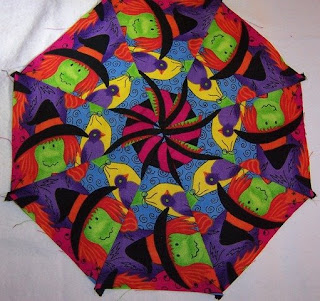 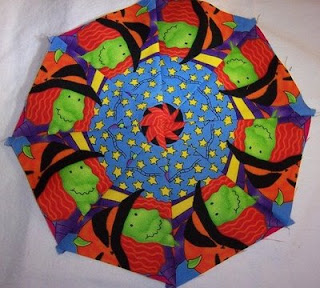 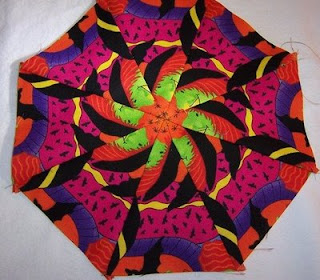 I never knew quite from the wedges how the final block would turn out - it was hard to visualize what the seam allowance would eliminate from the final effect - especially in the centers.
I thought I was going to lose the one-eyed witch in this one, but she surprised me and still peeks out from the middle 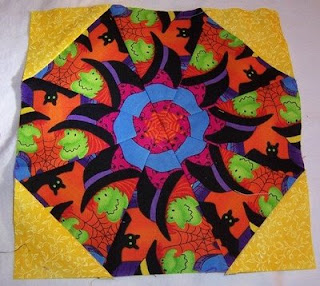 Still working from my stash, I decided to add the yellow corners to each block to form the square - since the yellow is the least dominant color in the original fabric. I am going to try to pick up some black, blue, purple, orange and lime fabrics to do some borders, sashing and other accents both front and back, but I have not yet figured out my final block arrangement.

Oh - the little ones are fun, too - the witch face is not so dominant in those due to the small size, so they get more "abstract". 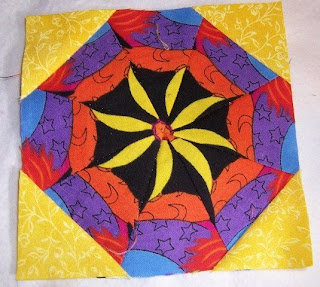 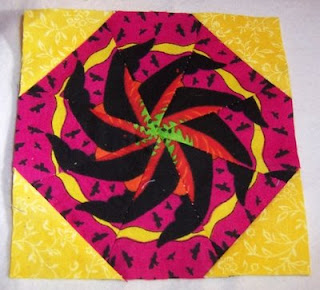 I just love how the colors shift and change from block to block -and how quickly these go together.

I hope to have this completely done soon (at least by Halloween!)- other projects are patiently waiting in the wings - but don't think for a second that I have this technique entirely out of my system yet. The magic has just begun!!!

That looks like it was the perfect fabric for those blocks. They are all so different looking and I love em. Good thing you found that large piece so you could try it out.

I've never thought about using a novelty fabric for a stack and whack. It's going to turn into a cool quilt.

Oh fun! I did a stack & whack years ago...well I started it anyway...it is in a box somewhere.

I did a stack n whack years ago (my MIL claimed it) but I just may have to play with that again. Your blocks are fabulous! I would have thought that fabric was too busy but it's PERFECT! Can't wait to see the final piece.

...and how is the purple Miranda coming along...? ;-)
LOVE the squares, being a paper person, I see a resemblance to Tea Bag Folding (no, not used tea bags, the decorative wrappers, silly), how you fold them determines the patterns.
And that witch is SO cute!
Love you sis!
C

Good job on 'finding' the fabric! The quilt is going to be great.

That is just one cool idea and it's going to be an awesome quilt!

Those blocks look awesome! It was way easier to plan my blocks when I cut my triangles for my novelty print OBW - the Wizard of Oz.

This makes me want to pull mine out and finish the borders!

@Jill - your Wizard of Oz was another reminder to me that I wanted to try this - and probably why I did not think twice about using a novelty fabric. Maybe that's the good part of doing this outside a class - I had no limits.

I still want to do a OBW but need to find a good design wall space before I tackle that one. Maybe with a good turtle fabric??!?!

I love it... the blocks are excellent!! I would have never guess they would turn out so cool. How wonderful... the funkier the fabric the cooler the outcome. shellie

That will be a really cool quilt when finished. Keep us posted on how it's going!