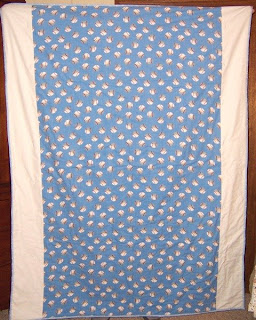 This quilt has a back story - or perhaps a "backing story", as it is one of those quilts that started with the backing fabric and grew from there.

A few years ago I was assistant coordinator for a leadership training retreat for Lions Club members. The coordinator at the time was (and still is) a HUGE NY Yankees fan, from his shirts and hat and coat and other gear - right down to his NY Yankees corkscrew.

During preparations for our 'hospitality' evening - I was using said corkscrew to open up the wine and ended up opening a gash in my thumb instead. In the cafuffle the corkscrew also got broken. I jokingly told him I broke it on purpose because I don't like the Yankees.

While I have never been able to replace that corkscrew, when I found this baseball flannel I knew I had to incorporate it into a quilt of some kind for Ken and his wife Jenn (also a rabid fan) - who I have continued to work with on subsequent leadership training institutes. (Ken and Jenn - if you are reading this - SURPRISE!!! You will get this when I see you in Syracuse next week) I could not find the flannels I wanted to coordinate with this one, so I decided to use it on the back and just do a red white and blue on the front - using the Yellow Brick Road pattern (again). As I am not really a baseball fan myself, and really truly not overly fond of the Yankees anyway, which is a recurring joke between the three of us - this was the closest I was willing to come to Yankee pinstripes.

I had a moment of crisis on this quilt, however, when I prewashed the baseball flannel backing (which was the end of a bolt...with no more in sight) - and it SHRUNK more than was recoverable. Hence the two white borders on the sides of the backing.

What a pretty quilt. i am sure they will love it.

I think the best quilts have a back story. That is great! And pieced backings are all the rage right now so you should just say that its meant to be that way! Giggle