I left the house at 9:00 AM - scooted to the PO to mail out a squishie to the winner of my 200th blog post giveaway, filled up the gas tank, and headed out. Miranda was packed with my maps, my lunch, my camera, and my shopping list. I had my wallet and necessities tucked into Sassy to bring into the stores, but ended up leaving my lunch in the car and just grabbing all of Miranda. I had some swatches and other things in her for matching and it left my hands freer in the stores. She was a perfect companion for the day! My first stop - Mt. Pleasant Quilting Company, is actually only 17 miles from me. Now WHY OH WHY have I not been here before!!! What a great store - I got there before they were officially opened, but that was not a problem. They welcomed me right in, and when they found out I was a first time customer one employee gave me a tour of the store as to where everything is, and then went off to try to match one of my swatches while I browsed. They were having a "make your own sale" where your entire purchase was 25% off with their newsletter coupon, and I had found the downloadable newsletter on their website before I headed out, so I was all set. They've got some great classes and a wonderful classroom space, and I really enjoyed the atmosphere there. If schedules allow - I hope to take a class or more from them. 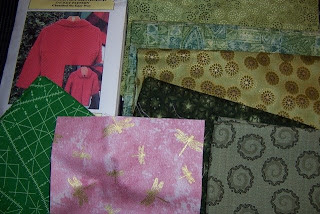 I had brought my turtle quilt pattern with me - and decided that I would collect "turtle shells" on this shop hop, and then other fabrics as they called out to me. I didn't want to commit to buying for a big project so I figured I would just pick up little things here and there. At this first stop I found five good turtle shells. Ialso found a great jacket pattern, and a couple fun FQ's.

Lazy Sister Sue was just starting out on a road trip of her own to FL with a couple shop stops planned. I called her a few times on the cell phone during the course of the day, so she kind of went along with me. 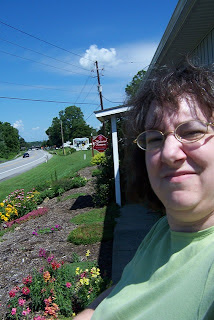 Stop 2 was Material Rewards Quilt Shop. This is a bit further away, but actually someplace I have driven past many times and never noticed. This shop was HUGE and had a wonderful selection of flannels - if I decided to do a big flannel project I will definitely head back there. They were holding a "Christmas in July" workshop but I did not join in because I was watching the time, although I did peek at the projects after the group broke up. Lots of ideas. 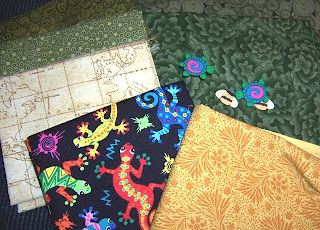 This shop did have the primary fabric I was searching for (Moda A Morris Garden gold - to do the inner border on my Disappearing 9 Patch. ) I also found a few more turtle backs, some fun Gecko fabric for the Munchkin, and some map fabric for a project I am working on for a Lions Club leadership training retreat. They also had great buttons, and I picked up some turtles and bees (go figure!).

While in their store I chatted with LSS, sampled the Christmas Cookies, and just marveled at the huge selection. In the parking lot I consulted my next map, pulled out my bag lunch, and headed down the road again. 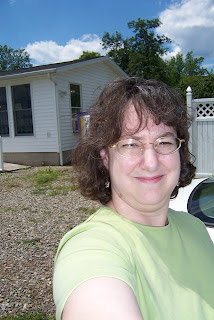 The third stop, Sew Pieceful Quilt and Gift Shop, was the shop I originally intended to start at, before LSS bought a Quilters Travel Companion and spurred me to extend my list of stores. I got there shortly after noon, after calling once to get directions through the farm field and rural roads. Beautiful countryside (more on that in a later post) and a beautiful sunny day for a drive.

This was another very personable and friendly environment, where I felt like I had known these people forever. I had talked to the shop owner a few days ago, telling her I planned to be there when they opened. I apologized, and told her about my extended hop. We chatted through the room as I browsed, and she also gave me the quick tour of where everything was. 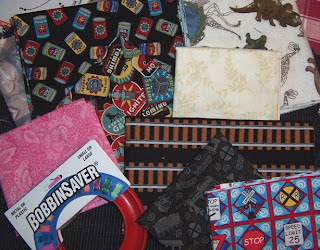 I found some AWESOME fabric to do a travel tote for my FIL - who is restoring an old car and would appreciate the vintage oil can and automotive sign themed fabrics. I also found some train themed fabric for the Munchkin, a few great scraps in the remnant bin, and a BRIGHT FQ for a good online friend who bested me in June's quilting hours contest and likes really bright colors. Zoe needed a bobbin keeper, as her bobbins are a different size than Melody's - so that rounded out my purchases at this stop. No turtle shells here, though.

After leaving this shop, my next destination was actually the hotel where the meeting was being held, in Corning, NY. My plan was to park the car at the hotel, and walk one block over to Market Street, where there are lots of shops, boutiques, antique dealers and restaurants. I had already had lunch, and once I got to the hotel I had a little over an hour before I had to report to the meeting. 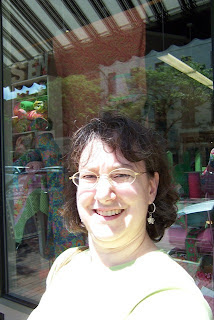 I headed straight out to Corning Stitch Works, a tiny little shop in a great old building with the high high ceilings and old woodwork and great 'atmosphere' . The selection here was smaller, but very unique as she had a lot of vintage fabrics, trims and lines I had not seen at most of my other stops. Quilts and projects were intermixed with antiques and it was just a fun and funky environment.

I only bought a few little things here. I loved the vintage fabrics, but nothing called out strongly enough for me to bring it home, and so I got a turtle back and a couple of neat little 1/4 yard rolls. 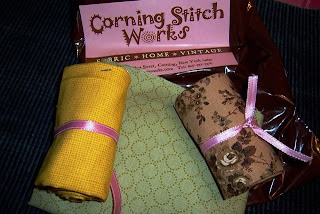 And then this is where I got lucky and discovered a FIFTH stop in my "Four Shop Hop". A shopkeeper from a few stores down had stopped in to chat, and when she heard my story about my "One Woman Four Stop Hop" she suggested I stop into her store as well - she said she focused more on embroidery machines, but did have fabric, as she was going out of business and moving to NC everything was on sale. 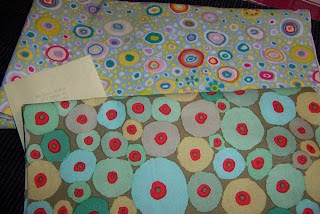 We walked back down to her shop - The Glass Thimble - (did not get a photo of me in front, but you will have to take my word for it that there was a 5th store) and I found a couple more fun fabrics.

With 25 minutes left to go before my meeting, I headed back, poking my head into two antique shops on the way. I was tempted by an old quilt block, but had spent the last of my cash (had 25 cents left) and did not want to pull out a credit card for a $1 purchase so I passed it up and headed back to the hotel.

The meeting went well - and the best part came at the end...when they told me to submit a voucher to have my mileage covered!!!

Can't wait for the next meeting -so I can plan another hop. Wonder where that one will take me?

I love your shop hop report! It sounds like you had a great time and found some great finds. I love the pictures of you in front of the shops - such fun.